An incredible Two Weeks Trip to 3 Countries, India, Bhutan & Nepal. Darjeeling in India is perhaps the most beautiful Hill Station of India. From the time of the British Raj, Darjeeling has maintained its charm. The lovely Tea Gardens, the awesome view of Mt. Kanchanjunga combine to make it a moment one will remember for a life time. 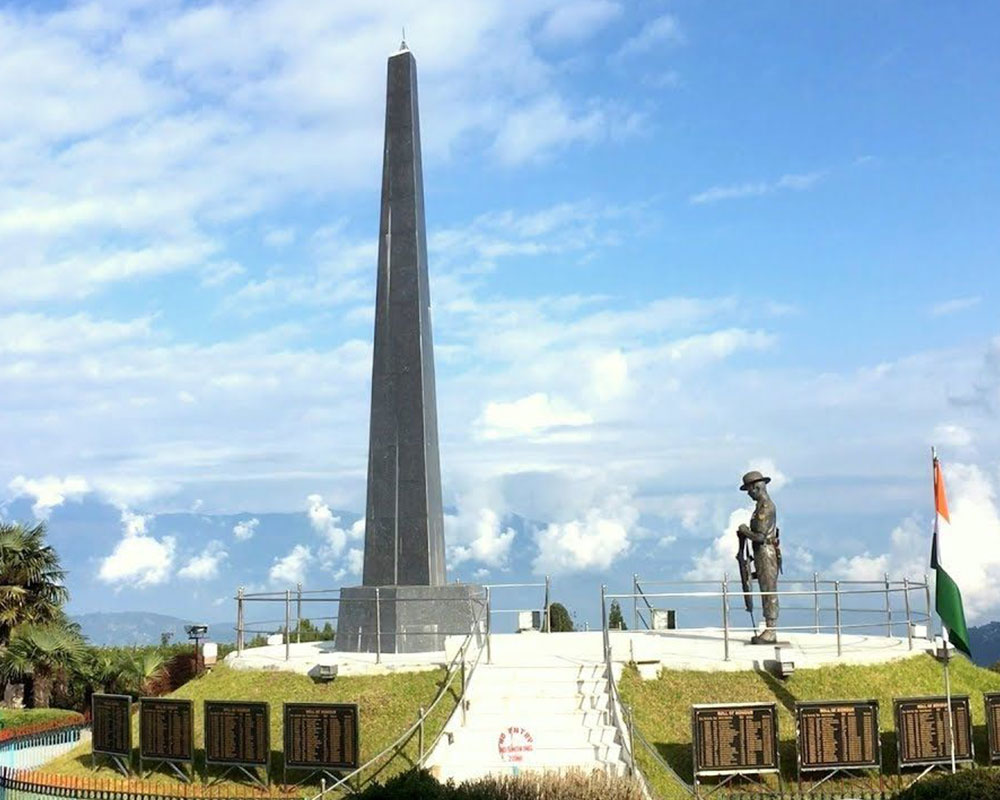 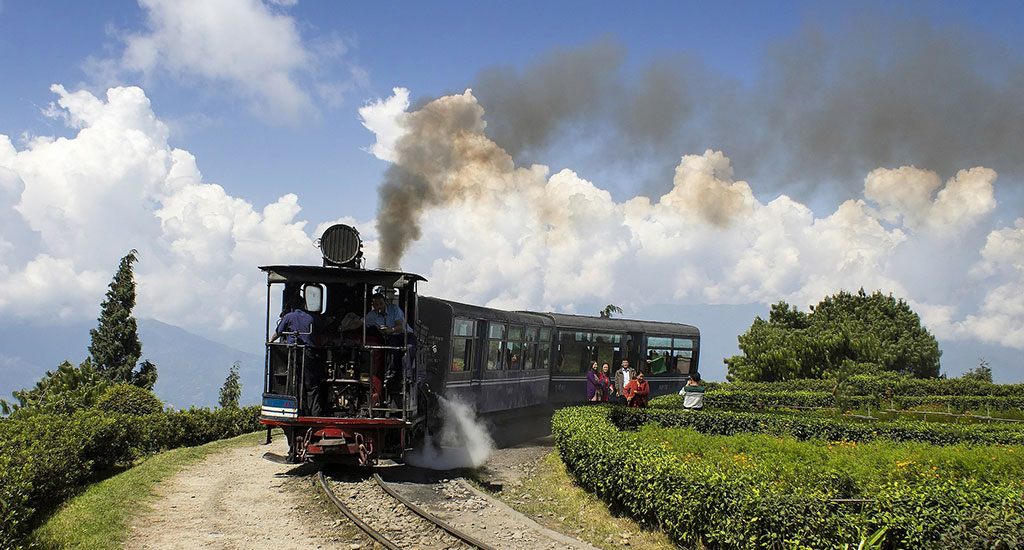 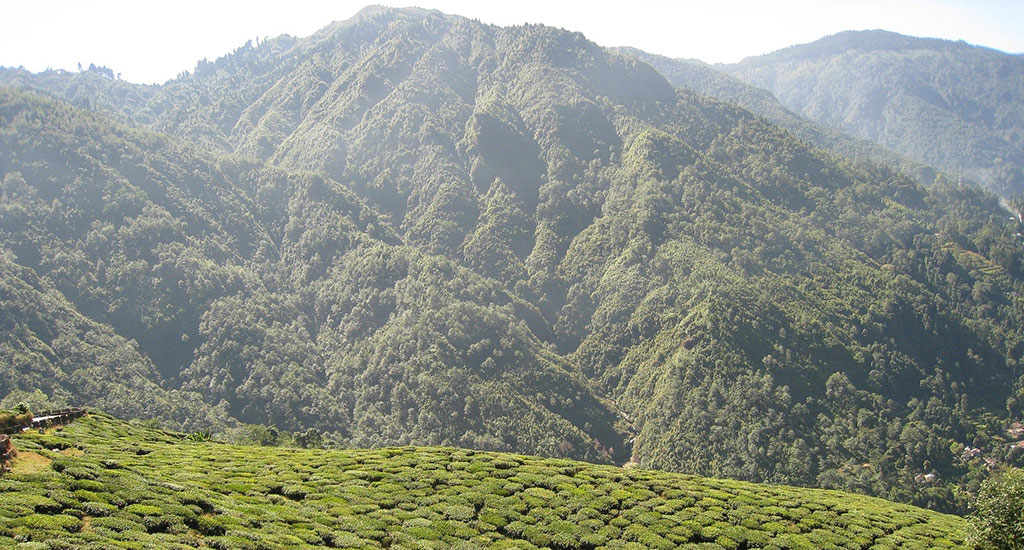 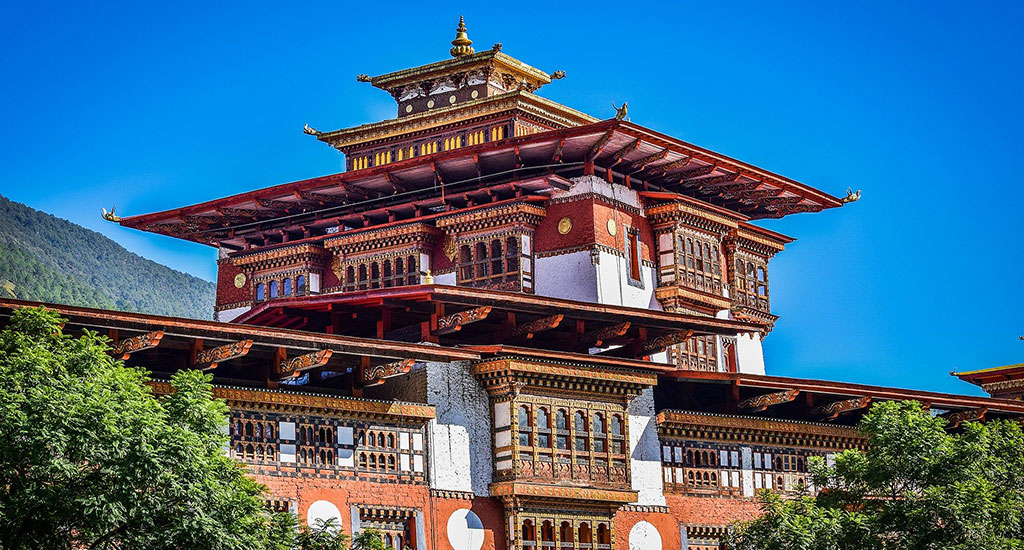 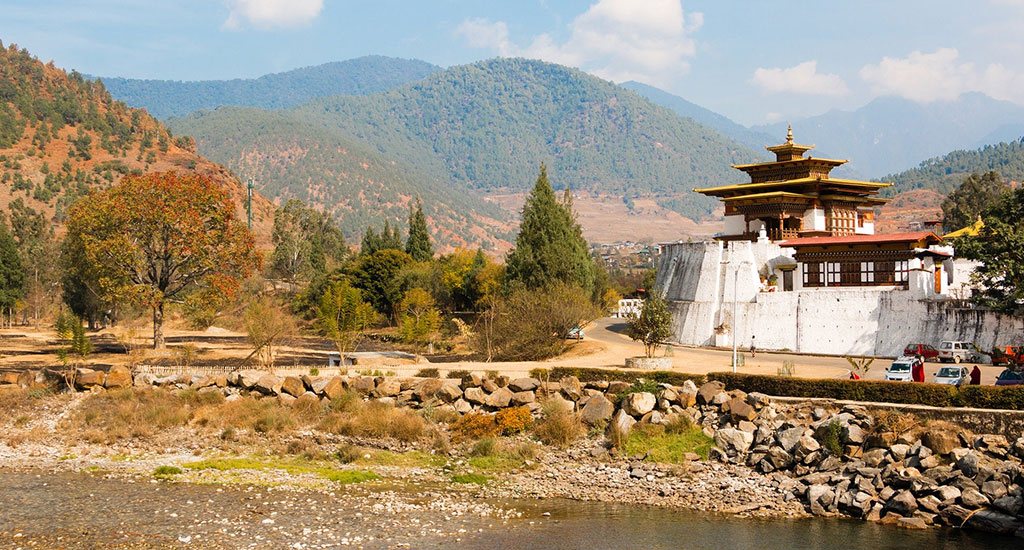 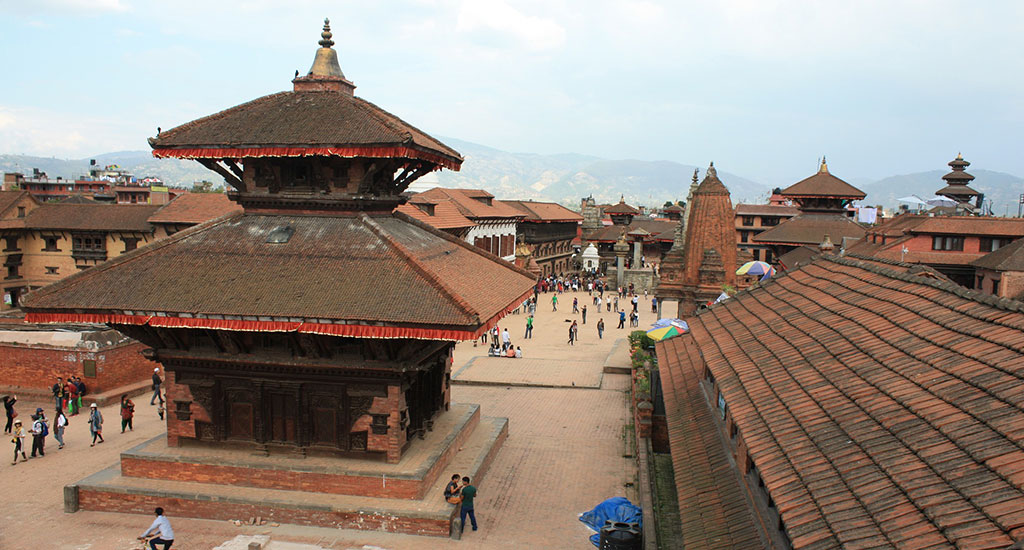 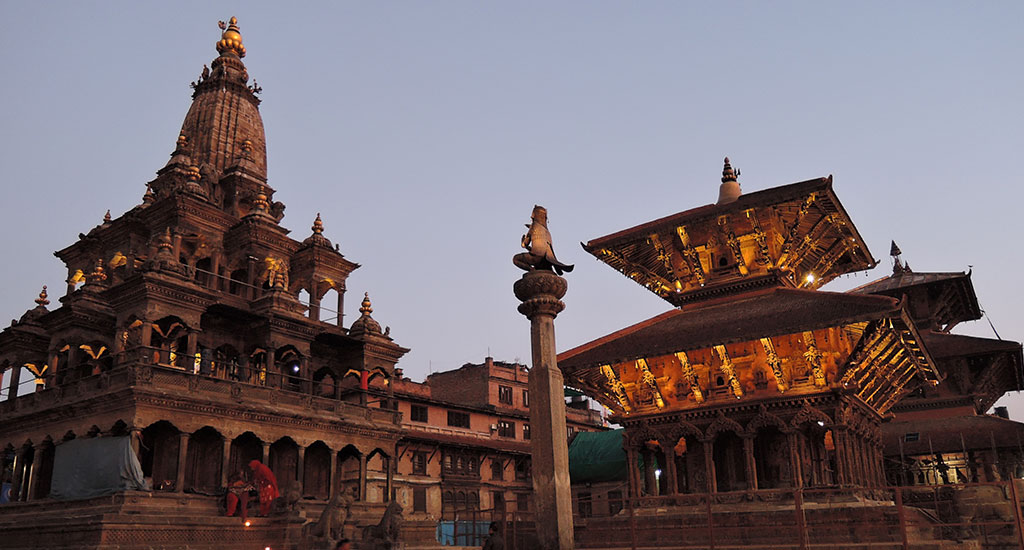 On arrival at Bagdogra Airport, you will be met by our local representative who will assist you to board your vehicle to Darjeeling.

After breakfast drive to Phuentsholing 230km a second town of Bhutan. After reaching at Phuentsholing visa formalities and transfer to the hotel.

Drive to Thimphu. Upon arrival check into hotel. Rest of the day at leisure or free to stroll around.

After breakfast, proceed for the sightseeing “ Visit Motithang mini zoo to see the rare national animal of Bhutan and drive further down with good view of the Thimphu valley. Further visit the following places.

National Library: The National Library of Bhutan (NLB) was established in 1967 with the primary objective of collecting and preserving mainly ancient Bhutanese written and printed resources. The multi-functional library can now pride itself on being a modern library with a number of service and research facilities. It accommodates a large and steadily growing collection of manuscripts, books, scriptures and written documents as well as a large number of hand carved wooden blocks for printing traditional religious books.

Heritage Museum: Inaugurated by Her Majesty, the Queen Ashi Dorji Wangchuck on 28th July 2001, Phelchey Toenkhyim or the Folk Heritage Museum at Thimphu provides you a glimpse of lifestyle, items and artifacts of Bhutanese villages and rural households. Besides the display, the museum also organizes demonstrations of rural traditions, skills, habits and customs, educational programs for children and research and documentation on rural life of Bhutan. The museum building itself is one of the star exhibits of the library. It is a restored three-storey traditional rammed mud and timber house that resembles the average rural household in the Wang area during the mid-19th century, complete with typical household objects, domestic tools and equipments that were used by rural families of that period.

Textile Museum: Her Majesty, the Queen Ashi Sangay Choden Wangchuck, inaugurated the National Textile Museum in 2001. She is also the patron of the museum and has helped in boosting both national and international interest in Bhutan’s textiles and textile art traditions. Bhutan's textiles are an integral part of its cultural and heritage and are unique for their diversity and sophistication.

Memorial Chorten: The memorial chorten, with its sun-catching golden finial, is one of the most visible religious structures in Thimphu, and for many people it is the focus of their daily worship. Throughout the day people circumambulate the chorten, whirl the large red prayer wheels and pray in the adjacent shrine. The early morning is particularly tranquil as elderly people shuffle in and spruced-up kids on their way to school whiz in and out to pay homage. There are no mortal remains of the King inside the Chorten.

After breakfast, drive for about 3 hours to Punakha via Dochula pass at an altitude of 3100 meters. On fine weather you will see the eastern Himalayan ranges including the highest mountain in Bhutan Mt.Gangar Punsum 7520 meters. The drive from the pass is all the way downhill dropping to the lower and warmer valleys of Lobesa.
Visit the Punakha Dzong which served as an old capital of Bhutan. This remarkable fortress is built between two rivers and has survived many glacial floods and fire. Every year during the month of February a procession known as the Punakha Serda takes place to commemorate the victory over the Tibetans.

After breakfast, drive for about 04 hours to Paro and visit Paro Dzong, Ta Dzong and Kyichu Lhakhang.

After breakfast, drive for about 04 hours to Paro and visit Paro Dzong, Ta Dzong and Kyichu Lhakhang.

Taktsang Monastery:Taktsang or the Tigers lair as the monastery is widely regarded is one of the most important in Bhutan. Its history is associated with the visit of Guru Padmasambhava, the Indian saint who came to Bhutan in the 8th century AD. The cave was named Taktshang after Guru Rinpoche flew into the cave from Kurtoe Singye Dzong in eastern Bhutan riding on a tigress. When landing within the cave he took the wrathful form of Guru Dorji Drolo (one of the eight manifestations of Guru Rinpoche) to subdue the demons. The monastery is one of the main thirteen Taktshangs as predicted to be built in the Buddhist world. The cliff on which Taktshang stands is also supposed to resemble a ritual dagger a Phurpa (Vajrakila).

After breakfast transfer to airport fly to Kathmandu. Flight arrival at Tribhuvan International Airport. Meet, assist by office representative and transfer to hotel. Check-in at the hotel.

AM: Kathmandu City:Known as Kantipur, is the capital of the Kingdom of Nepal. A 218 square miles of land, situated above 4400 ft above sea level, Kathmandu is the hub of Nepalâ€™s traditional culture and arts. Kashtamandap the source of the name Kathmandu and supposed to be made from the timber of a single tree and the Durbar Square are with its array of temples overlooked by the Hanuman Dhoka, Seto Machendranath and the ancient place of the Nepalese Royalty.

Swoyambhunath Stupa:Watches over the valley from the top of a hillock on its western side. The stupa is one of the holiest Buddhist sites in Nepal and its establishment is linked to the creation of the Kathmandu Valley out of a primordial lake. Swoyambhunath is also known as Sengu and is listed as a World heritage site.

PM: Patan City:Located about 5 km south of Kathmandu in the Kathmandu Valley, on the southern side of the Bagmati River, Patan is one of 3 royal cities in the valley. A destination for connoisseurs of fine arts, Patan is filled with wood and stone carvings, metal statues, ornate architecture, including dozens of Buddhist and Hindu temples, and over 1200 monuments. The city of Patan is believed to have been built in the third century B.C. by the Kirat dynasty. It was expanded by Lichhavis in the 6th century A.D. and again by the Mallas in medieval period. Durbar Square, like its counterpart in Kathmandu, is an enchanting melange of palace buildings, artistic courtyards and graceful pagoda temples. Listed as a World Heritage Site, the former royal palace complex is the center of Patan’s religious and social life, and houses a museum containing an array of bronze statues and religious objects.

Bhaktapur City (Bhadgaon):Also known as city of devotees, this place is the home of medieval art and architecture. Lying 14 kms./9 miles east of Kathmandu City, this place was founded in the 9th Century and is shaped like a conch shell. The city is at the height of 4600 ft. above sea level. In Bhadgaon, you will visit the Durbar Square with its array of temples overlooked by the Palace of 55 windows built by King Bupatindra Malla. The Nyatapola Temple, also built by King Bhupatindra Malla, is the best example of Pagoda style and stands on five terraces on each of which stands a pair of figures are “ two famous strong men, two elephants, two lions, two griffins and two goddesses.


Nagarkot is a village located about 32 kilometer east of Kathmandu, Nepal. It is located on the northeastern rim of the Kathmandu Valley at an elevation close to 6,800 feet above sea level. It is one of the most scenic spots in the region, renowned for its sunrise and sunset views of the Himalayas. You can pick Mount Everest out with its snow-topped peaks on a clear day as there is an observation tower at the very top of the villages hills.

After breakfast drive back to Kathmandu en-route sightseeing tour of Pashupatinath Temple and Boudhanath Stupa.

Pashupatinath Temple:Pashupatinath Temple is one of the holiest Hindu Temples dedicated to Lord Shiva. Situated amidst a lush green natural setting on the bank of the sacred Bagmati River, the temple built in Pagoda Style has gilded roof and richly carved silver doors. Pashupatinath is the centre of annual pilgrimage on the day of Shivaratri which falls in the month of February/March. Behind the temples are the cremation grounds.

Boudhnath Stupa:One of the oldest and the biggest Buddhist monuments ever built in Nepal, Furthermore it is one of the holiest Buddhist sites in Kathmandu. Boudhanath is an imposing structure standing some 36 meters. The Stupa stands on the massive three level mandala style Platforms surrounded by colourful private family houses. Listed in the UNESCO World Heritage list this site is considered very much like Mecca for the Buddhists and every year tens of thousands of pilgrims from all over the Himalayan region visit the stupa.

We ensure that that you will leave Kathmandu with cherishing memory and an experience of a lifetime.Our representative will drive you to the airport in time for your flight back home.