As recently as 1961 all entry into Bhutan was still on horse back. Druk-yul, the land of the thunder dragon is only just emerging from the mists of its self-imposed isolation. The last Shangrila is an exotic land of high mountains and lush valleys, snow clad peaks with clear running springs, a pristine ecology and an incredible wealth of wildlife.

A most striking feature of Bhutan is its architecture. The style and color which characterize every building and house in the kingdom is a distinct source of aesthetic pleasure. The Dzongs themselves – imposing 17th century structures built on a grand scale without drawing and without a single nail, are outstanding examples of the best in Bhutanese architecture. Patterns of rich colors adorn every wall, beam, pillar and door in traditional splendor.

Nestled deep in the eastern Himalayas between India and Tibet, the simple pleasure that this country offers gives a sense of kinship with the people and their love for the land. Essentially a rural country with 90 per cent of the people engaged in agriculture or raising livestock, Bhutan is predominantly Buddhist, practicing the Tantric form of Mahayana Buddhism. 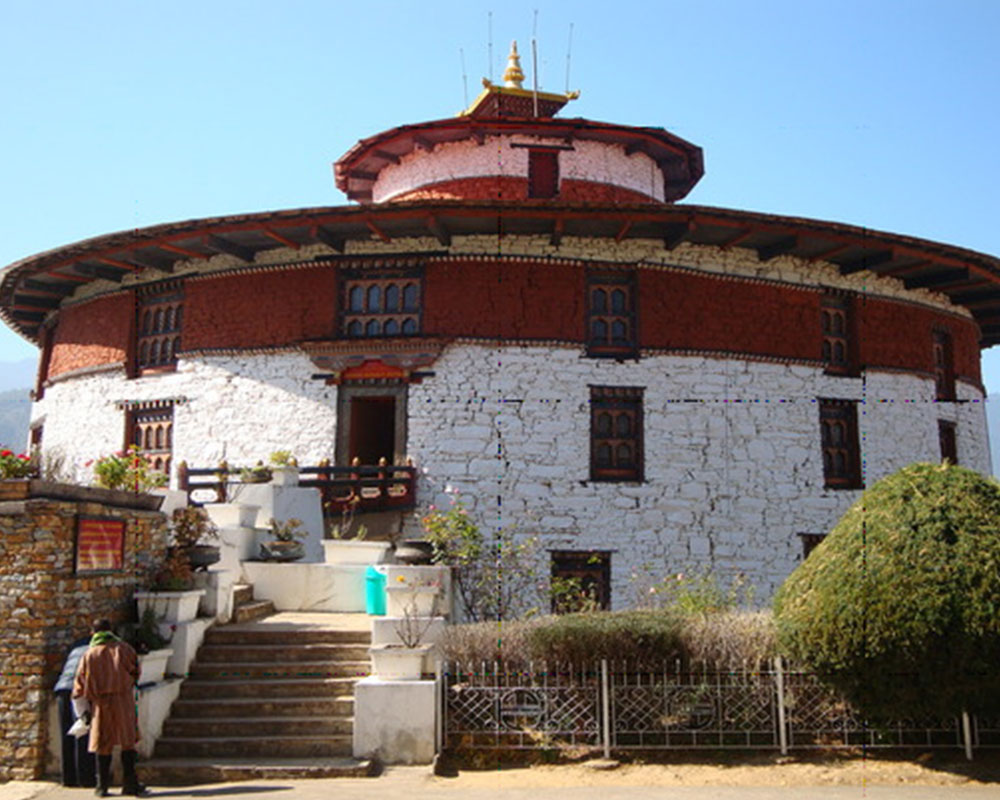 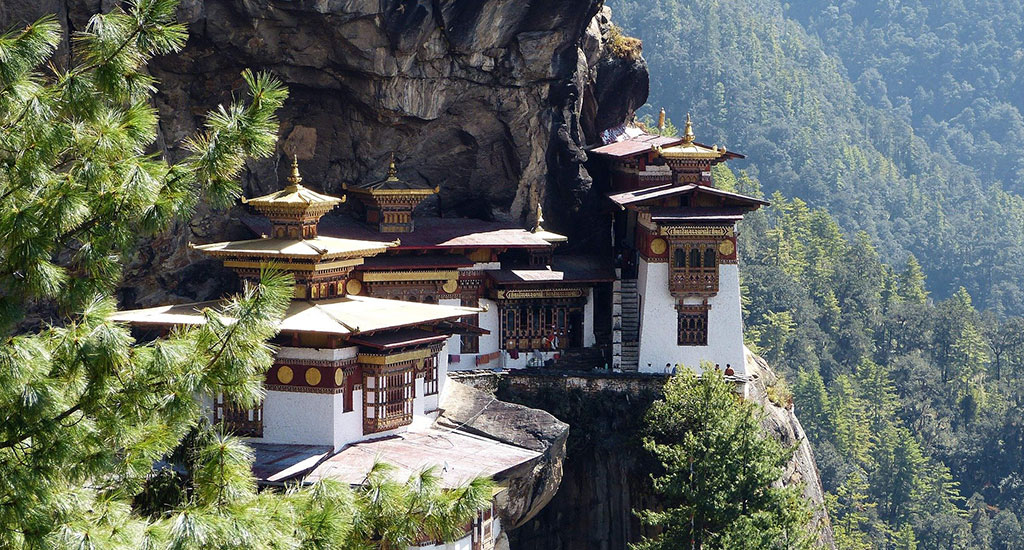 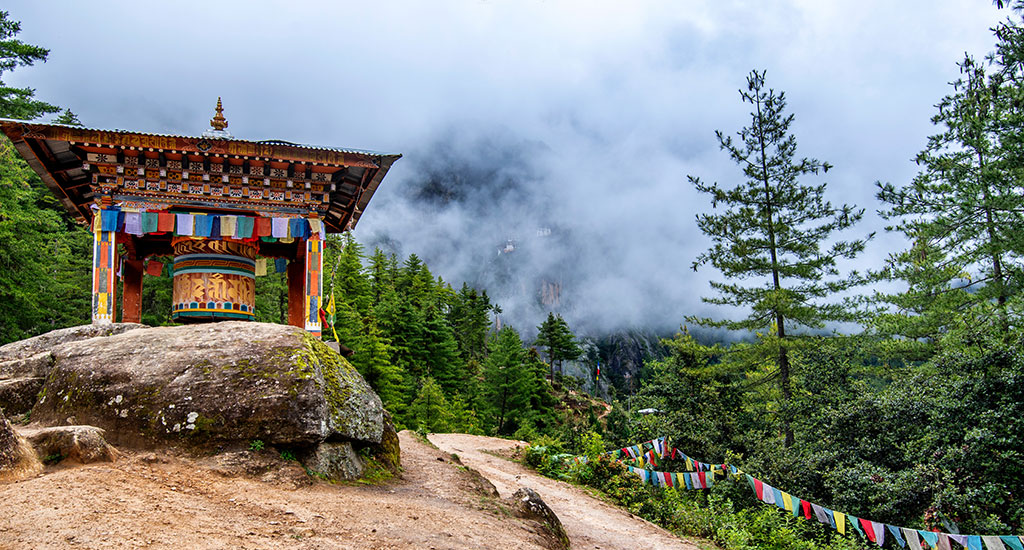 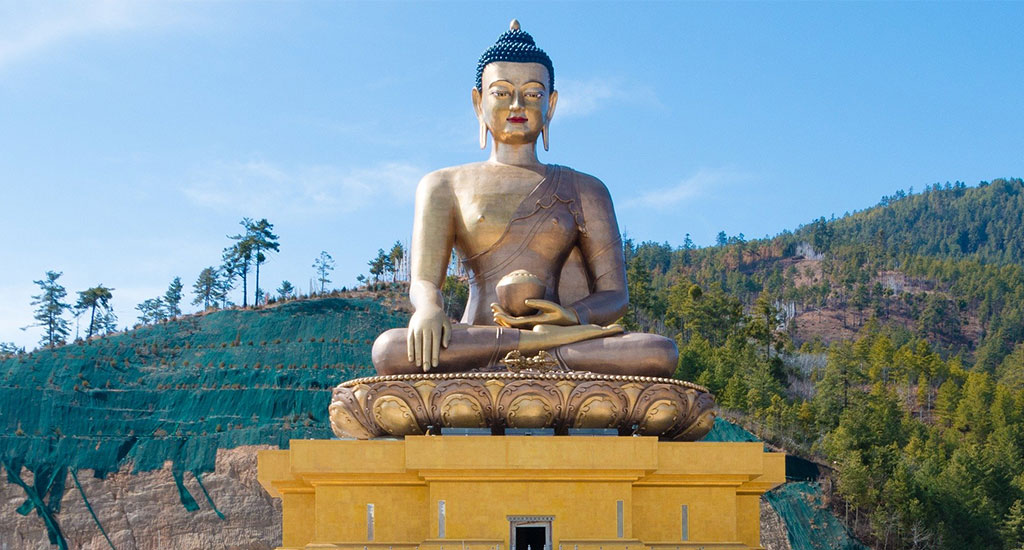 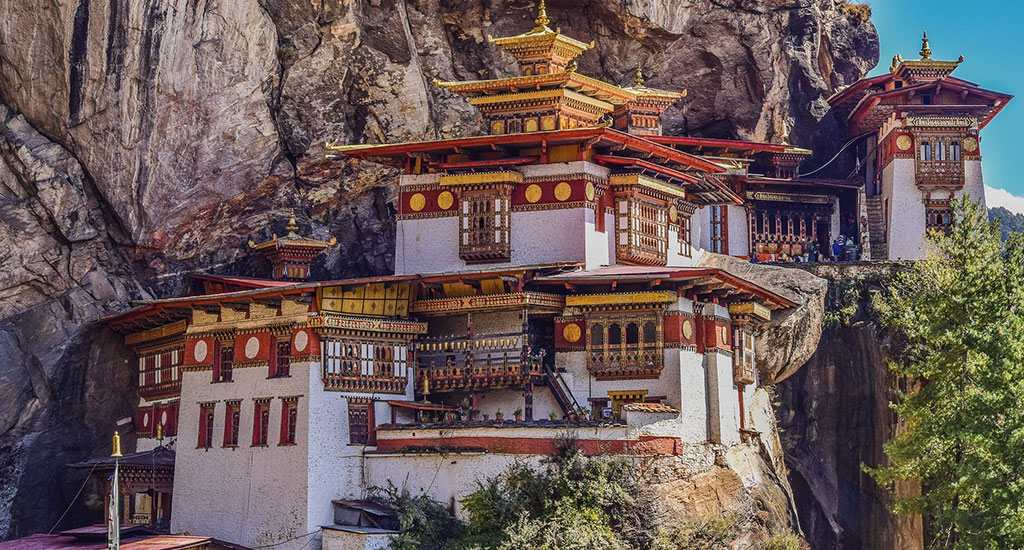 Landing in Paro valley is a perfect entry into this other world, with its transparent purity of the air and its absorbing serenity. Paro retains its bucolic nature in spite of the existence of development projects. Fields of brown or green depending on the season cover most of the valley floor while hamlets and isolated farms dot the landscape.

On arrival you will be met and assisted by our representative from Yeti Holidays. We begin our hour long journey towards the capital of Bhutan, Thimphu.

The rest of the day is spent getting used to the altitude and soaking oneself in the rich cultural surrounds of the destination.

We begin our day with a visit to the Changangkha Lhakhang- It is a fortress like temple perched on a ridge above Thimphu, south of Motithang. The temple was established in 12th century on a site chosen by Lama Phajo Drugom Zhigpo, who came from Tibet. The central statue here is Chenrezig in a manifestation with 11 heads. From the courtyard of the temple, there is fascinating view of the Thimphu valley. Next we will visit the Takin Zoo- The zoo houses the 'Takin ‘the national animal of Bhutan. This is a distinctive species by itself, with the body of an antelope and a goat's head. A drive further will reach you to BBS tower which offers some breath taking views of the Thimphu Valley below.

After lunch we will visit the Folk Heritage Museum, founded by Her Majesty the Queen Ashi Dorji Wangmo Wangchuck. The museum is dedicated to connecting people to the Bhutanese rural past through an exhibition of items and artifacts used in rural households, demonstrating customs, traditions, habits and skills. The principal exhibit is the museum.

Later we will proceed towards the National Memorial Chorten (1974) built in honor of our late King Jigme Dorji Wangchuk.The Memorial Chorten, with its golden spires shining in the sun, its tinkling bells and an endless procession of elderly people circling around it. Erected by the royal grandmother Ashi Phutsho Choeden in memory of her son the third king Jigme Dorje, it contains a fine collection of Buddhist statues and is a center of tantric Buddhism in all its complexity.

In the evening, drive towards the Tashichho-Dzong Also known as the 'fortress of the glorious religion', it was initially built in 1641 and later rebuilt in its present form by King Jigme Dorji Wangchuk in 1965. The Dzong houses the main secretariat building with the Throne Room of His Majesty the King of Bhutan. The National Assembly Hall is housed in a modern building on the other side of the river from the Dzong. During the warmer summer months, the monk body headed by His Holiness the Je Khenpo resides in the Dzong.

After an early breakfast, set out for the beautiful valley of Paro, upon arrival we will visit the National Museum, located in Paro Dzong's 17th- century watchtower. The building itself boasts an unusual shape said to resemble a conch shell.

However objects and artifacts have been moved to a new wing, just above the main building where visitors are allowed to visit. See a fine collection of old thangka paintings and textiles, ancient weapons, and Bhutanese artifacts.

Enroute visit the Paro Dzong, also called Rinpung Dzong, the Fortress of a Heap of Jewels. Constructed in the early 15th century as a diminutive fort, it was presented to the religious and political authority of Shabdrung Ngawang, who developed it into a much more commanding fortress in 1646. This is without doubt one of the kingdom's finest examples of traditional Bhutanese architecture. Once, great catapults here flung stones at invading Tibetans. Today the dzong houses a monastic school. Two hundred resident monks take meals in a communal room. Several interesting paintings here include an unusual Bhutanese interpretation of a mandala, a diagram of the cosmos.

We return to our transport crossing the traditional wooden covered bridge called NYAMAI- ZAM which spans the Paro River. Earlier, in times of war, the bridge was removed each time to protect the Dzong!

The rest of the day is at leisure, we can take a walk down Paro's main street, straight and windswept, its occasional idlers leaning against the store-fronts. It's another opportunity to interact with the local people and visit the interesting small shops occupying the ground levels that provides the basic necessities.

After breakfast, we drive around 30 minutes to Ramthanka base for a hike to view one of Bhutan's most revered pilgrimage sites of the Buddhist world, the Taktshang Lhakhang, popularly known as the "Tiger's Nest" Monastery. The trek offers spectacular views of this sacred monastery perched precariously on a sheer rock face 3000 ft above the valley floor. Legend has it that Guru Rimpoche, father of Bhutan's stream of Mahayana Buddhism arrived in the Paro valley more than a millennium ago on a back of a tigress. He meditated for 3 months in a cave which was converted into this monastery. The only sounds heard here are the murmurs of wind, water and the chanting of monks.

We begin our hike from the base to the cafeteria which will take us at least an hour and a half. From here it;s about an hour's trek through some stunning landscape to reach the monastery. On our return, we stop by once more at the Cafeteria for lunch. Later, we begin our descent to Ramthanka base.

The rest of the evening is at leisure, relax at the hotel or visit the Paro town to look for some souvenirs.

In the morning our representatives from Yeti Holiday will escort you to Paro International Airport and bid Good-bye and pleasant flight back home.