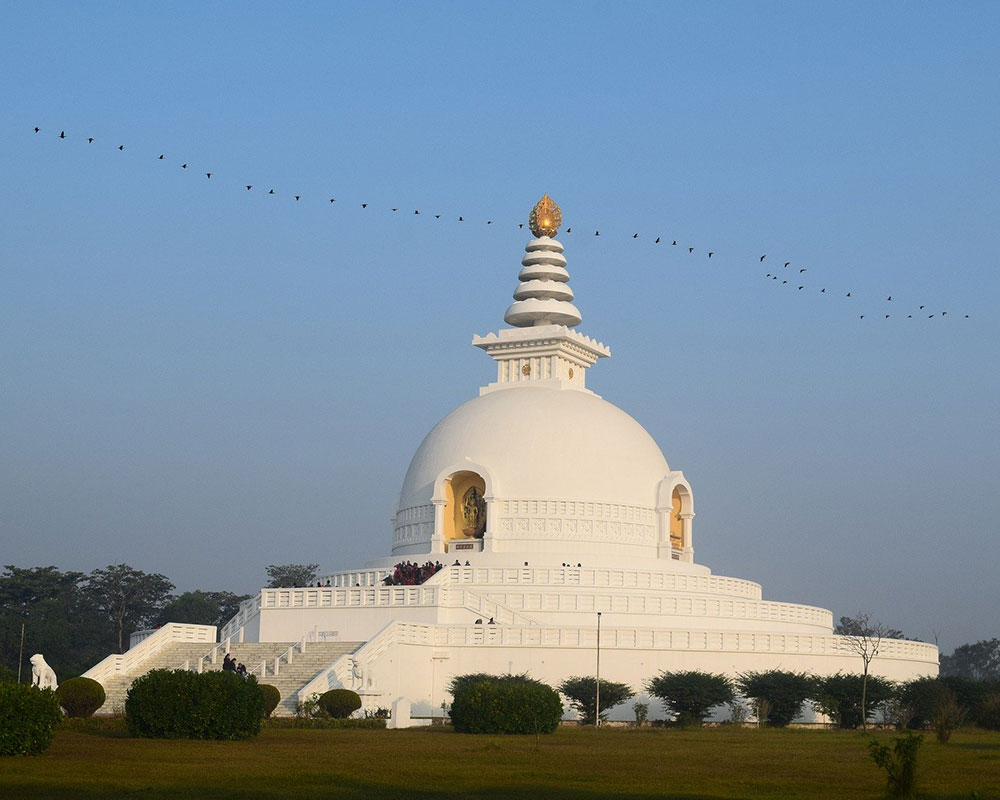 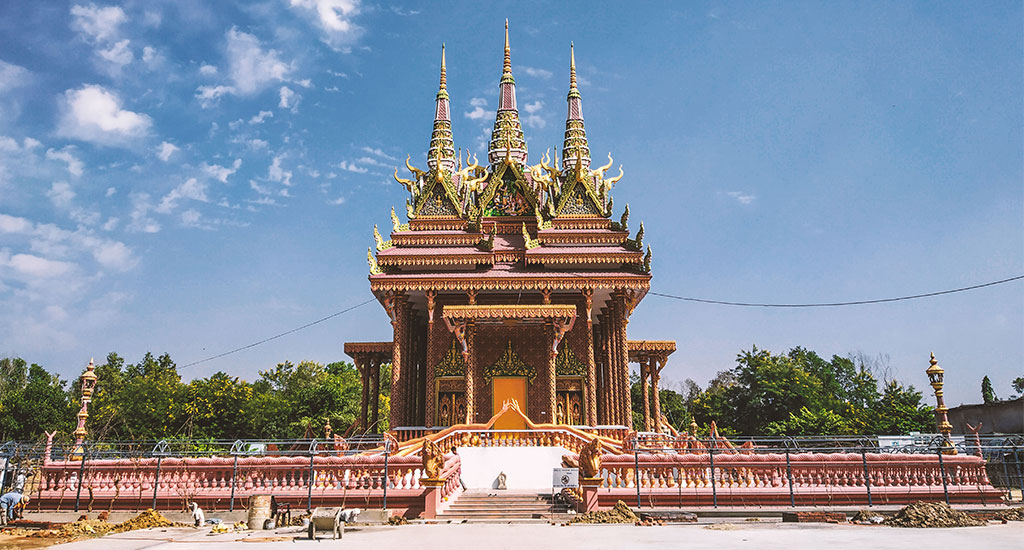 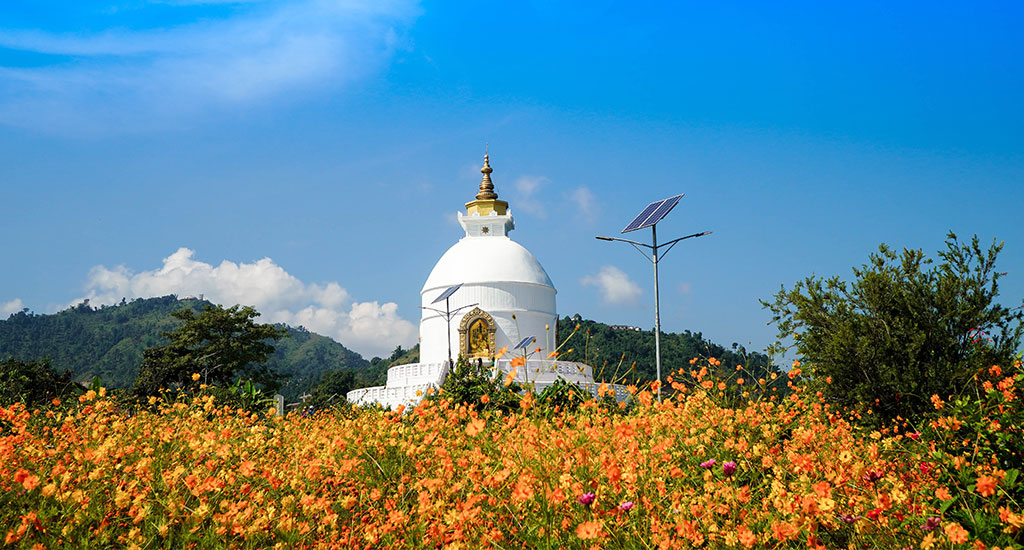 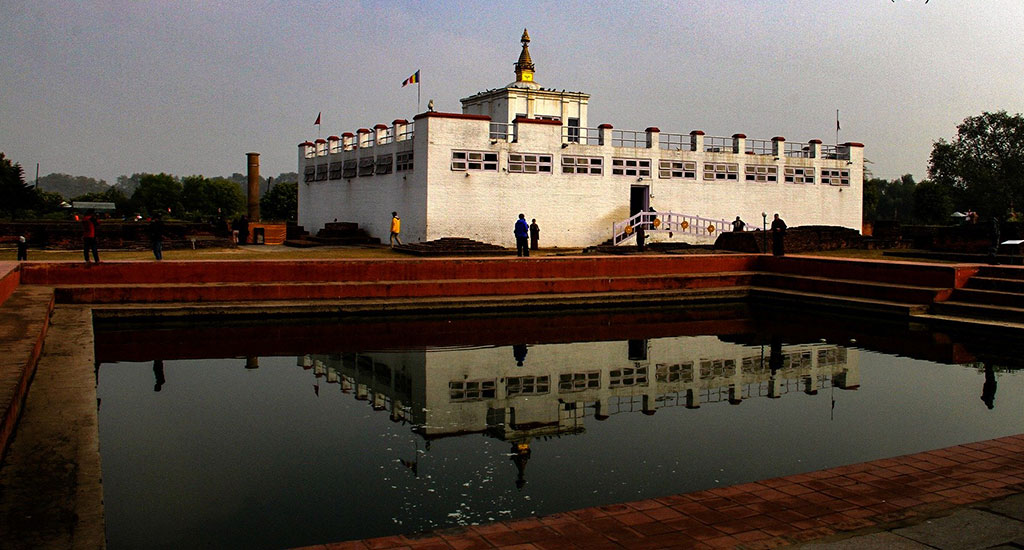 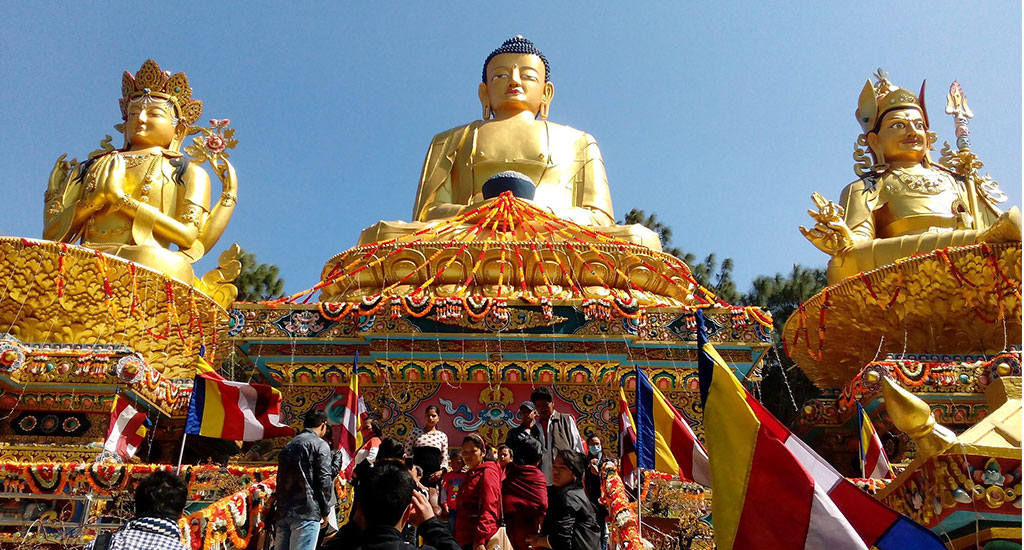 FLY TO BHAIRAHAWA/DRIVE TO LUMBINI

FLY BACK TO KATHMANDU/SIGHTSEEING TOUR

One of the must-see landmarks of Nepal is, of course, the highest peak in the world – Mount Everest. An awe-stricken silence comes close to matching the experience of a mountain flight. For one hour, you’ll fly over the Eastern Himalayan Ranges of Nepal where some of the highest peaks in the world including Mt. Everest lie for a surreal feeling as you come face to face with the world’s tallest and most enigmatic of Mountains. Even those visitors who like the rigors of a trek won’t miss the opportunity to “conquer” the mountains in one stunning swoop. After breakfast at the hotel, commence the sightseeing tour of Bouddhanath Stupa and Kapan Monastery.

BOUDHANATH: the world’s largest stupa. It is a site of great reneration to the Buddhists. Bouddhanath is the center of Tibetan culture in Nepal. The 36-meter-high stupa of Bouddhanath is one of the largest stupas in South Asia. Bouddhanath Stupa was renovated by Licchavi rulers in the eighth century. The mandala design in Bouddhanath is a copy of the one in Gyangtse in Tibet. The stupa is located in the area of ancient trade route to Tibet where Tibetan merchants rested and offered prayers for many centuries. When refugees entered Nepal from Tibet in the 1950s, many decided to live around Bouddhanath. Hence, a complete township has developed around Bouddhanath. The stupa is said to entomb the remains of a Kasyap sage venerable both to Buddhists and Hindus. Smaller stupas are located at the base. Gompa monasteries, curio shops, and restaurants surround Bouddhanath.

We carry on the sightseeing tour of KOPAN MONASTERY. It is a Tibetan Buddhist monastery near Boudhanath, on the outskirts of Kathmandu, Nepal. It belongs to the Foundation for the Preservation of the Mahayana Tradition (FPMT), an international network of Gelugpa dharma centres, and once served as its headquarters.

The monastery was established by the FPMT founders, Lamas Thubten Yeshe and Thubten Zopa Rinpoche, who bought the property from Nepal's royal astrologer in 1969. Its name comes from the name of the hill on which it was built. Kopan has become especially famous for teaching Buddhism to visiting Western foreigners. The first of what would become annual month-long (November–December) meditation courses was held in 1971. These courses generally combine traditional Lam Rim teachings with informal discussion, several periods of guided meditation, and a vegetarian diet.

Technically, "Kopan" now encompasses two separate institutions - the Monastery itself, on top of Kopan Hill; and the Khachoe Ghakyi Ling Nunnery, located nearby. In recent days, Kopan Monastery has also established itself as a popular recreational destination for Kathmandu residents and local tourists as well. The weekend holiday of Saturday receives quite a visit from hundreds of families and individuals to the beautifully decorated hillock and its gardens. The monastery is not open to public on other days.

FLY TO BHAIRAHAWA/DRIVE TO LUMBINI

After breakfast at the hotel connect a flight to Bhairawaha and continue drive to Lumbini (approx 1 hr).

Lumbini is situated at the foothills of the Himalayas in modern Nepal. In the Buddha's time, Lumbini was a beautiful garden full of green and shady sal trees (Shorea robusta ). The garden and its tranquil environs were owned by both the Shakyas and the clans. King Suddhodana, father of Gautama Buddha, was of the Shakya dynasty and belonged to the Kshatriya (warrior caste). Maya Devi, his mother, gave birth to the child on her way to her parent's home in Devadaha while resting in Lumbini under a sal tree in the month of May, 642 BC. The beauty of Lumbini is described in Pali and Sanskrit literature. Maya Devi, it is said, was spellbound to see the natural grandeur of Lumbini. While she was standing, she felt labour pains and catching hold of a drooping branch of a sal tree, she gave birth to a baby, the future Buddha.

In 249 BC, when the Indian Emperor Ashoka visited Lumbini, it was a flourishing village. Ashoka constructed four stupas and a stone pillar with a figure of a horse on top. The stone pillar bears an inscription, which in translation runs as follows: 'King Piyadasi (Ashoka), beloved of devas, in the 20th year of the coronation, himself made a royal visit, Buddha Sakyamuni having been born here; a stone railing was built and a stone pillar erected to the Bhagavan having been born here, Lumbini village was taxed reduced and entitled to the eight part only.

After breakfast at the hotel commence the sightseeing tour of:

Ashokan Pillar in Lumbini: The Ashokan Pillar-In 1895, a German archaeologist, white wandering about the foothills of the Churia range, discovered a massive stone pillar erected by Emperor Ashoka in 250 B.C. to pay homage to the birth place of Buddha. It is said that the Indian Emperor visited Lumbini Garden in the twentieth year of his coronation.

The stone pillar bears the following inscription: King Piyadasi, beloved of the gods, having been anointed twenty years, came himself and worshipped saying: "Here Buddha Sakyamuni was born. He caused a stone pillar to be erected, because the worshipful one was born here. Thevillage of Lumbini has been made free of taxes and a recipient of wealth.

Pokhara is the most popular destination for visitors to Nepal. The city is also known as the center of adventure. There is little in its past by way of neither history nor culture impact and the only important role that the old Pokhara played was that it was along the route of trade between India and Tibet. Today it is one of the fastest developing cities of Nepal, mainly due to tourism. The natural beauty of its lakeside location and its proximity to the mountains has made it the natural choice for trekkers and adventures. Pokhara is also the base for some of most famous trekking circuits of Nepal. By itself surrounding area provides ample scope for short walk and day trips, suitable for children or weary trekkers, which can be made around the valley.

Phewa Lake: Spend a quiet time boating in the ultimate lake where the reflections of Mount Annapurna and Machhapuchhre range falls. You will also see a variety of fishes while boating. An island temple is located at the middle of the lake. Thick forest lies on the adjoining southern slopes of the lake. It’s hard to escape the draw of Phewa Lake and any visitor with even a few spare minutes should endeavour to take a boat out on the water to fully experience the wonderful views of the reflected mountains.

After breakfast at the hotel commence the sightseeing tour.

Devi's fall: Locally known as Patale Chhango (Hell's fall), Devi's fall is an amazing waterfall lying about 2 km south-west of Pokhara airport on the highway to Tansen. It was named after Devi, a Swiss lady who was swept away when the floodgates were accidently opened, never to be seen again.

Seti River Gorge: Carved by Seti River, the gorge is one of the natural wonders of Pokhara. Ki Singh Bridge at Bagar, Mahendra Bridge & Prithivi Highway Bridge near Bus Park provides a perfect view of the deep river gorge with turbulent rush of milk like water.

Tibetan Villages: Tibetan Villages, Tashiling in the south and Tashil Palkhel in the north of Pokhara Valley are the two Tibetan villages that are inhabited by the Tibetan people who keep themselves busy by producing and trading woollen carpets and other handicrafts.

World Peace Stupa: Balanced on a narrow ridge high above Phewa Tal (Lake), the brilliant-white World Peace Pagoda in Pokhara is a massive Buddhist stupa which was constructed by Buddhist monks from the Japanese Nipponzan Myōhōji organisation. Besides being an impressive sight in itself, the shrine is a vantage point which offers spectacular views of the Annapurna range and Pokhara city. There are three paths up to the pagoda and several small cafes once you arrive.

FLY BACK TO KATHMANDU/SIGHTSEEING TOUR

After breakfast at the hotel we connect a flight back to Kathmandu. On arrival at the domestic airport meet, assist by our representative and commence the sightseeing tour of Patan city and The Tibetan Refugee camp.

PATAN CITY: Located about 5 km south of Kathmandu, Patan is one of 3 royal cities in the valley. A destination for connoisseurs of fine arts, Patan is filled with wood and stone carvings, metal statues, ornate architecture, including dozens of Buddhist and Hindu temples, and over 1200 monuments. Patan is believed to have been built in the third century B.C. by the Kirat dynasty later expanded and enriched by the Licchavi and the Malla rulers in the medieval period. Patan Durbar Square, like its counterpart in Kathmandu, is an enchanting mélange of palace buildings, artistic courtyards and graceful pagoda temples. The former Royal palace complex is the centre of Patan’s religious and social life, and houses a beautiful museum.

TIBETAN REFUGEE CAMP: Seeing the sights of Kathmandu was interesting, but the human elements of the city left a much deeper impression on me. After the temples and sights of Patan, we visited the Jawalakhel Handicraft Center, an establishment within the Tibetan refugee camp in the Jawalakhel sector of Kathmandu. At the Handicraft Center, which was established in 1960 with the help of the International Red Cross, hundreds of Tibetans create artifacts and collectibles to help sustain their families at the camp.