The trek takes you along the Kali Gandaki to Muktinath on the border of Mustang, which is popularly known as the Himalayan Shangri-la. As you hike through the Kali Gandaki Valley, passing through the deepest gorge in the world; the trek finally emerges into the wide valley of Jomsom, a Himalayan Shangri-la. Beginning the trek from Nayapul after a short drive of about 45 minutes from Pokhara, the trail passes over the Ghorepani pass and descends down to Kali Gandaki valley. The views from the first rays of the sun at the break of dawn grace the pinnacles of Dhaulagiri and Annapurna from Ghorepani, creating a landscape that is absolutely magnificent to behold. Along the route, fascinating traditional villages of Gurung, Magar & Thakali will keep you enthralled day after day as you hike along the way. Once you reach Jomsom you can either trek to the famous Muktinath temple [Temple of Lord Vishnu] at 3710 meter or explore the fascinating villages around Jomsom. This is an easy trek that can be done any time of the year except during the monsoons [July & August]. 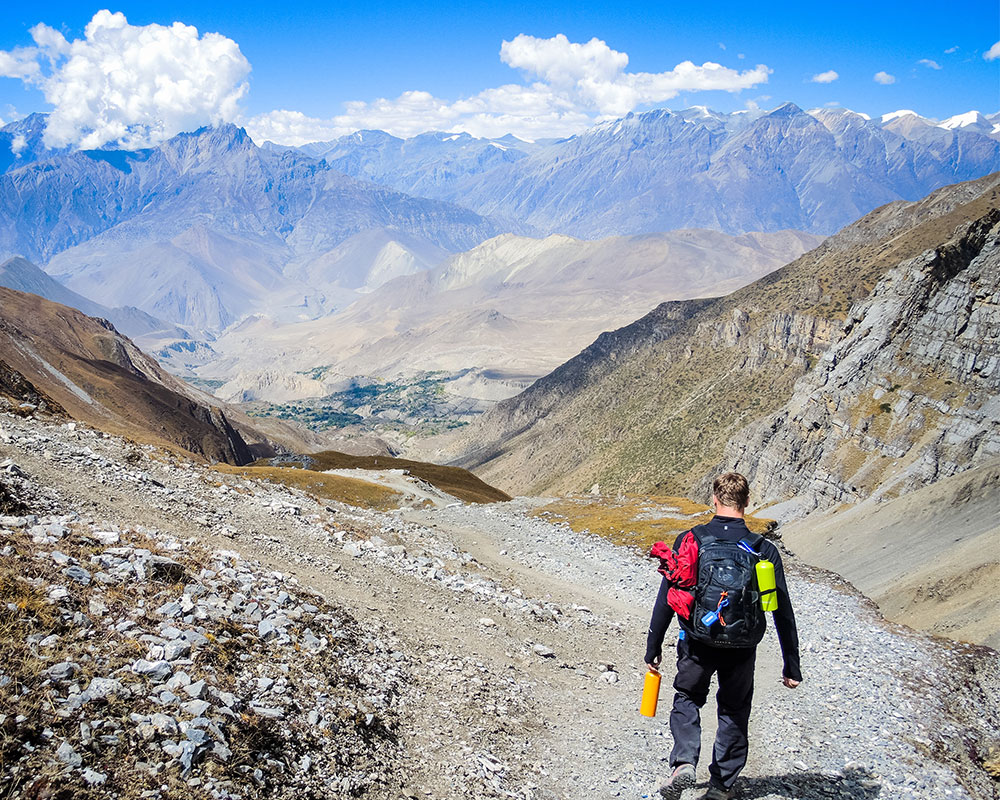 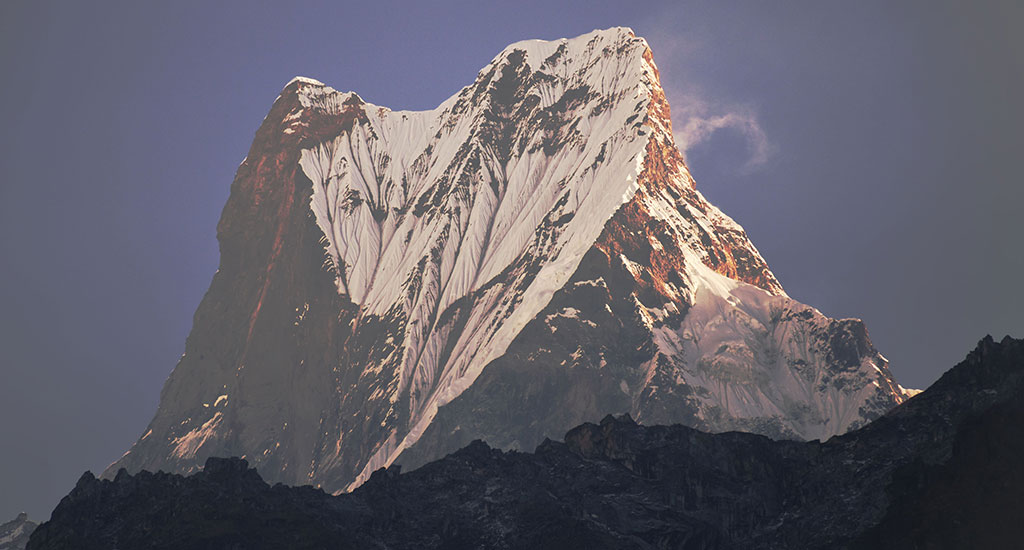 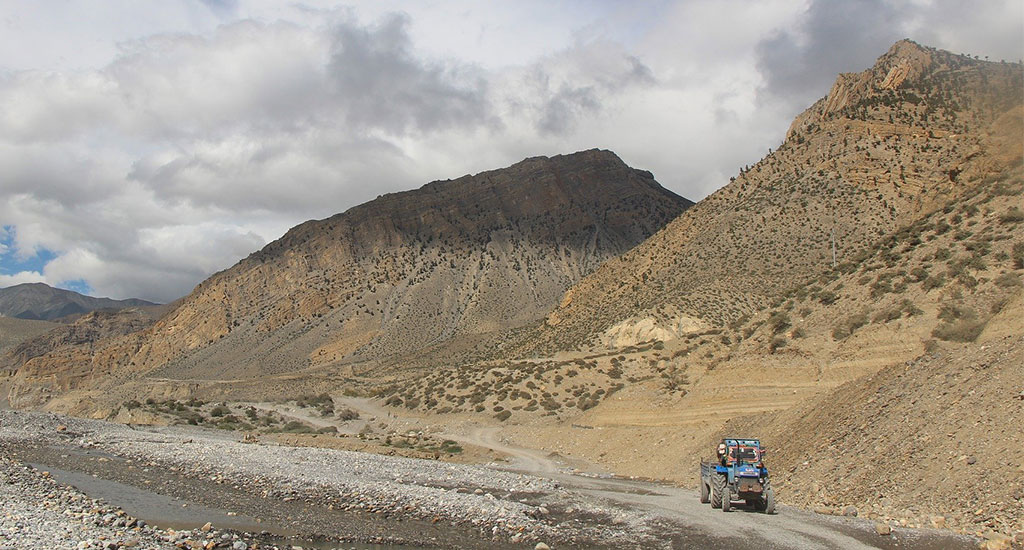 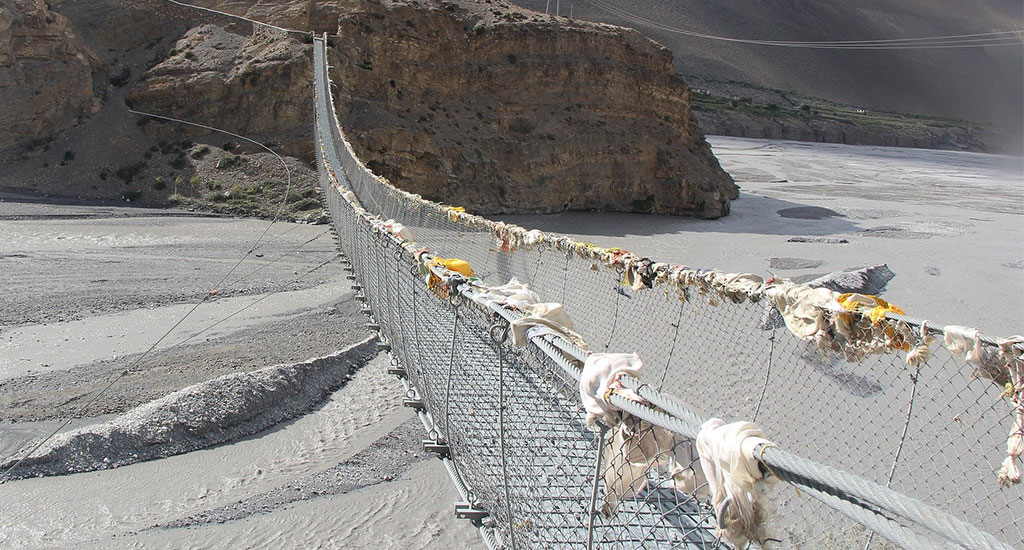 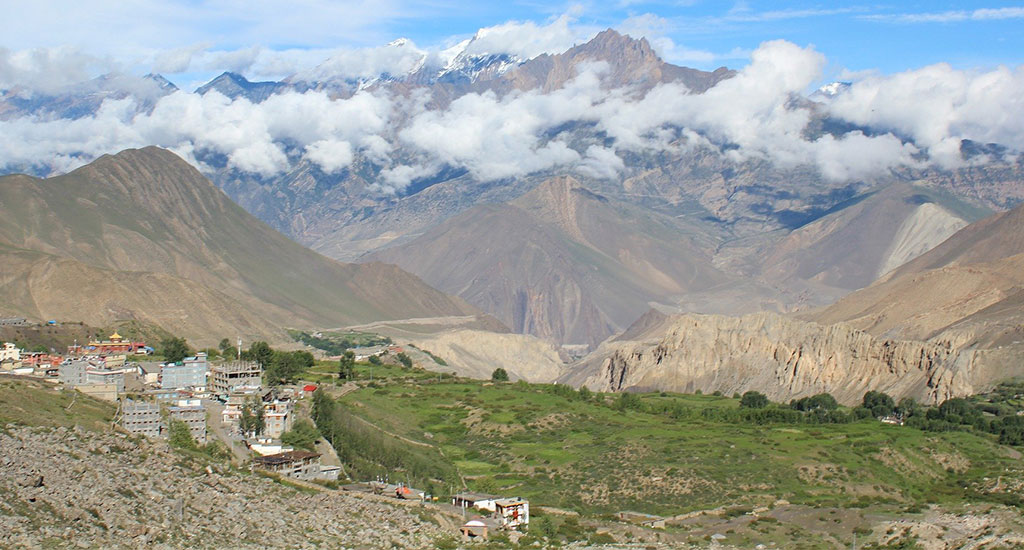 It is a panoramic thrill flying into Kathmandu on a clear day. The views of snow-capped mountain peaks sprawling down below you are almost ecstatic, beginning a whole chain of memorable experiences that stay with you for a long, long time. A representative and driver from Yeti Holidays will meet you at the airport and escort you to hotel. The representative will help you check into your designated hotel. At the hotel you will be briefed about your daily activities.

After breakfast at the hotel, commence the sightseeing tour of Kathmandu city, Swayambhunath and Patan city.

After breakfast at the hotel drive to Pokhara [210km], which will take 6-7 hours under normal road conditioned.

Pokhara is the most popular destination for visitors to Nepal. The city is also known as the center of adventure. There is little in its past by way of neither history nor culture impact and the only important role that the old Pokhara played was that it was along the route of trade between India and Tibet. Today it is one of the fastest developing cities of Nepal, mainly due to tourism.

The natural beauty of its lakeside location and its proximity to the mountains has made it the natural choice for trekkers and adventures. Pokhara is also the base for some of most famous trekking circuits of Nepal. By itself surrounding area provides ample scope for short walk and day trips, suitable for children or weary trekkers, which can be made around the valley.

After breakfast at the hotel we drive about 45 minutes brings you to a trailhead at Birethanti, a busy village of lodges, shops and houses. You commence your trek with a gradual ascent along the left bank of the Bhurungdi Khola. You then leave the river and follow a trail along the upper edge of terraced fields through Hille to Tikedungha. Thereafter, you cross a stream beyond the village and then drop down to the suspension bridge over the Bhurungdi Khola. Then you climb a long, steep and seemingly endless stone staircase, which eventually leads you to the village of Ulleri. From this village, there are fine views of Annapurna South and Hiunchuli.

As you ascend along the path that leads to a forest, you will find Annapurna South, hidden by a ridge. Beyond Banthanti, there are magnificent forests of oak and rhododendron. After crossing several crystal-clear mountain streams, you arrive at the village of Nangathanti. Another few hours of trekking through the forest, you reach Ghorepani. Ghorepani literally means "horse water" and is a popular watering spot for mules, which ply this route from Pokhara to Jomsom and beyond. A ten minutes walk takes you to a small pass and further to the village of Deurali. For proper acclimatization, you rest at Ghorepani.

You can catch an amazing view of the sunrise from an ideal vantage point of Poon Hill. After breakfast, you descend to Tatopani through the rhododendron forest amidst the magnificent natural vistas. As you near Chitre, you get an awe-inspiring view of Dhaulagiri range. The path then leads through terraced fields to Sikha, a Magar village clustered on a ridge. You continue descending, gradually at first and then more steeply to cross the Ghar Khola. After a short climb, you cross the Kali Gandaki on a large suspension bridge and from thereon, it is only a short distance upstream to Tatopani. Tatopani takes its name after the hot springs near the river below the village.

You have to follow the trail that ascends gently up the Kali Gandaki Gorge, the deepest gorge in the world, towards the village of Dana, which is surrounded by orange groves. En route, you come across local people selling baskets of oranges. Just beyond the small hamlet of Rupse, a thundering waterfall cascades down beside the trail. Thereafter, the trail enters the steepest and narrowest section of the gorge. You will find the layered stone path well-constructed and wide. As the rock cliff ends, you head towards Ghasa, a quaint Thakali village. You can see several flat-roofed Tibetan style houses in Ghasa. [Walk approx 5-6 hours]

After breakfast you trek from Ghasa towards Larjung. Few hours of descents soon follow other rock-strewn ascents through forests of fir, cypress and juniper along the riverbank of Kali Gandaki. As soon as you reach Larjung, you cannot help but marvel at the architectural grandeur of this small town; tunnels, narrow alleyways and houses built in traditional style presents an interesting sight.

You begin to trek along the trail that follows the wide valley of the Kali Gandaki, passing through Khobang and Tukuche. Yet again, you get to see narrow alleyways and houses built around enclosed courtyards as a protection against the unpredictable wind of the Kali Gandaki gorge. The trail further meanders through stonewalled orchards. Soon you will come across a stone gate that marks the entrance to Marpha. You can spot several white-walled houses. Marpha has well-maintained drainage system and is most popular for its local apple brandy. After a lunch in Marpha, you continue trekking towards Jomsom. As you approach your destination Jomsom, the landscape becomes increasingly arid and impressive with its mixture of browns, yellows and greys contrasting with the white snowcapped peaks of Tilicho and Nilgiri.

After breakfast you resume your trekking along the path up to the vast gravel riverbed of the Kali Gandaki. You come across a stream and verdant vegetation. On crossing a small ridge to Chhancha Lhumba at 2730 meters, you continue heading towards Muktinath. Dhaulagiri and Nilgiri dominates the view as you ascend to Khingar (3200 meters). More meadows, streams and lush vegetation can be seen along the trail as it paves to Jharkot (3500 meters). You encounter the ruins of the Dzong and pristine villages of Purang and Changur. As you trek past mule stables and steep barren hillside, you enter Ranipauwa. Ranipauwa for years has remained an ideal resting point for pilgrims and travelers. On trekking further, you enter Muktinath. Temples and religious shrines are the major attractions of this holy place. Pilgrims flock to the Buddhist gompa and pagoda-style temple of Lord Vishnu. Muktinath is an important pilgrimage site for both Hindus and Buddhists.

Heading away from Muktinath, you retrace your steps to Jomsom taking on the magnificent view of Nilgiri. You stay overnight in Jomsom. In the evening you celebrate the completion of your trek with the crew, whom you have come to know so well over the last 9 days.

You board an early morning flight from Jomsom to Pokhara. Once you reach in Pokhara transfer to hotel.

All the day relax at the hotel or stroll through the town to explore the city.

After breakfast at the hotel we drive back to Kathmandu which will take 6-7 hours under normal road conditioned.

We ensure that that you will leave Kathmandu with cherishing memory and an experience of a lifetime. Our representative will drive you to the airport in time for your flight back home.